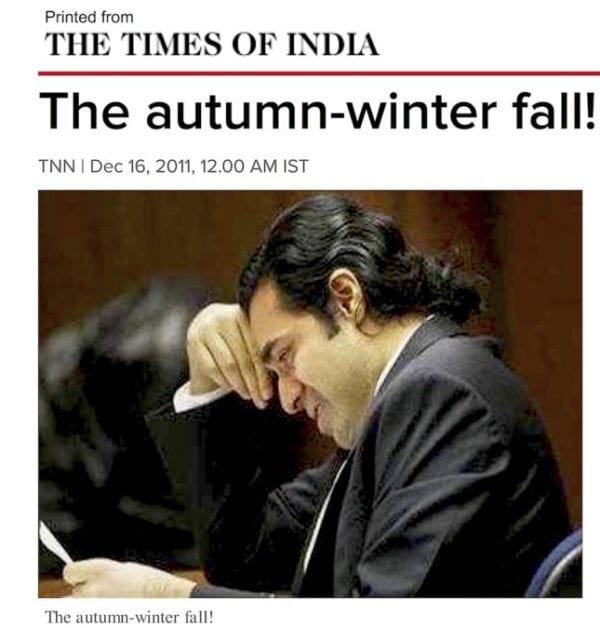 Once the toast of the fashion world, designer Anand Jon Alexander now fights a lonely long-drawn battle from within his prison confines in New York. Purba Dutt reports.

The year was 2006. Desi designer Anand Jon Alexander had wooed and impressed the Wall Street hard to-please stuffed shirts for them to have evaluated his brand name and agreed to pump in millions for his new ready-to wear line. The high priestess of high jinks, hotel heiress Paris Hilton was to be intimately associated with this project.

Life was not merely looking good, Anand was just a signature away from breaking into a league that only few could aspire to. The deal was to be inked on March 7, 2007. But, tragically, a day before, the dream ended. Reality caught up. Instead of inking the multimillion-dollar deal, Anand was negotiating the intricacies of the arrest warrant issued against him on charges of alleged rape, molestation and sexual indiscretions and indecencies. In no time, the charges were flying thick, fast, and all over the place as girls and women kept coming out of the woodwork complaining about Anand’s alleged sexual misdemeanours.

Five years hence, Anand lies on a heap of crushed dreams at the cold and formidable Rikers Island prison in New York as he awaits trial, having already been convicted in California and earning a sentence of over 50 years of imprisonment.

A few days ago, Anand was writhing in unbearable pain, and the jail authorities remained indifferent to his plight, insisting he was faking illness. They joked that he probably needed psychiatric help. When the doctor was finally summoned, it was discovered that Anand had kidney stones, which needed immediate intervention.

But Anand is hardly the hopeless defeated man you’d expect of someone who’s spent over four years in lock-up. He doesn’t rave, rant and rail against the cruel turn of fate. Instead, he sounds calm, composed, and you can detect his silent resolve to fight it out. So, how did things go so horribly wrong after getting off to something so goddamn right?

“Just before my grandmother, Ammana Abraham, passed away, I had won my art scholarship to go to America. She’d warned me about how fame and fortune can change anyone and a land of dreams into one of nightmares. It is heartbreaking to find out the hard way that some of the people I trusted as friends and partners had ulterior motives,” says Anand on the phone from Rikers Island jail.

His family and lawyers have suggested often enough that Anand’s super successful career in the US ultimately became the reason for his downfall as there were many who were insanely jealous of how an ‘alien’ boy was beating them in the sweepstakes on their own turf. Ask him if he feels let down and revengeful, and he stoically replies, “One of the worst feelings in the world is to be falsely accused. One of the worst experiences is this kind of humiliation and loneliness someone innocent is forced to endure. If someone like myself, who has no criminal past, no history of violence or drugs can be targeted like this, then no one is safe. Whether someone is a rich and famous celebrity or just a regular person, all human beings deserve justice. That was denied once to me and I am truly grateful that a higher power is opening new opportunities and a second chance for me. I do not wish such suffering upon anyone, not even those who did me wrong, whether accidently or intentionally.”

The life Anand’s leading behind the bars is a far cry from the life that Anand led before his incarceration. But he’s not complaining. His mother says that Anand won’t talk about the kind of food served to him or the conditions in his cell simply because he knows that nothing can be done about it. “This painful path is a powerful learning experience. It is humbling to follow the footsteps of our forefathers who were also wrongfully imprisoned as they fought against the Empire for truth, justice and freedom, and eventually won as the crisis united people to do the right thing,” he says philosophically.

Anand now spends most of his time brushing up his knowledge of law and legal matters and sketching, practising yoga and meditation. “Being born and brought up in India, the spiritual foundations of yoga and meditation have been a source of inspiration to walk through such adversity.”

And does he sense freedom, even if it might take some time coming? “There’s no question about it. Justice will ultimately triumph. Swaraj is my birthright and part of my life plan is to keep a covenant and help others fight against injustice. I do have many plans upon regaining my freedom, which will be seen in my actions rather than my advertising them.”

His family complain their finances have all but dried up; they feel that Anand’s celebrity friends from the US, barring a few like Ivanka Trump and the Chatwals, and Indians like Suhasini Maniratnam, and Anand’s uncle singer KJ Yesudas and a few others, not many have thrown their weight behind Anand and his family at this very trying time. But, what has upset them most is that the government has done precious little to exert pressure on the US to ensure fair and quick justice delivery. Says Anand, “Just like other communities stand by their own, if and when South Asians and Indians are targeted anywhere in the world, we must literally have a billion voices demanding justice for me. Today it is me, tomorrow it can be anyone.”

Down he may be, but not out. Anand says he’ll live and fight for another day. “It’s inhuman what I’m going through, but I don’t see any point in getting angry. It’s a travesty of justice and human rights all the way…the system wants to break you down, demonise you. In California, I was set up by my own lawyers. What can I do? File civil suits against those who falsely testified against me? I have kept the faith because if I break down and succumb, I willingly fall into the trap they’ve laid for me. This may work for criminals. For someone who’s worked and lived honestly, there’s no way I’m going to give in or give up. It’s been many years of total isolation for me, and I can’t sleep at night. I worry about my mother and sister, who’re fighting for justice for me. Once I get out, I’ll restructure my life. I’ll visit my grandparents’ graves first thing after release. I need intelligent media to take up my cause, the cause of someone very wronged by a system of justice that hitherto he’s had the highest respect for.”

Why did these girls take so long to speak up? — Rehane, Chennai-based designer

“I can’t claim to know Anand personally, though I’ve met his mother and sister Sanjana Jon, both perfectly decent human beings. It’s not for me to say if Anand is guilty or innocent. Ours is a profession where a lot can be misconstrued. It’s a handson job for us, literally. We have to be there with the models for their fittings and trials and when they’re changing into or getting out of their costumes.

Many people can, out of ignorance or under pressure, attribute malicious motives to what is otherwise just a normal part of our jobs. In our profession, no one’s interested in women! Colour, cuts, fits and, fall, but not women. The punishment being meted out to Anand is wholly disproportionate to the quantum of his so-called crime. Why did these girls take so long to speak up? Surely, these are not your wet-behind-the-ears models who didn’t know what was happening to them. It also beats me how Anand’s case could be about professional rivalry or jealousy. Surely, in the US there’s room for everyone.

Besides, Anand was only a fast rising star, not an established celebrity designer. It’s bizarre, this case, and I feel very sad for him. I think the US Justice system needs to look more closely at the case and review if it’s not being overzealous and irrational in way it’s being handled.

We have just set up a trust to raise funds to fight for justice for Anand Jon. I realise that money has had a huge role in setting many of these girls against Anand. Many of these women knew Anand well and have travelled to India with us. They’ve been his friends. And suddenly they started testifying against him and making all kinds of ridiculous sexual allegations against him. It’s a nobrainer that much money has changed hands. There’s been intimidation too. I had great hope and faith in the US justice system, but, sadly, that faith has all but eroded. It smells like racism the way Anand’s being treated. To secure bail, I’ll need billions. Where will I get this money from? The IMF chief can bail his way out; what can we do? The autumn- winter fall!